I Am Not Your Negro is a thought provoking documentary about race relations in America.  It is based on an unfinished project by author James Baldwin exploring race relations using Baldwin’s remembrances of murdered civil rights leaders (and friends) Medgar Evers, Martin Luther King and Malcolm X as a jumping off point.  The film uses archival footage of events in the 60’s + Baldwin interview/speaking engagements as well as footage of more recent events.  Samuel L. Jackson provides additional narration based on Baldwin’s writings.

Unfortunately, despite Baldwin having died 30 years ago much of what he said and wrote is still relevant today and this film is worth seeing

Weiner is an excellent documentary about Anthony Weiner’s ill-advised run for NYC mayor a couple of years ago.  He attempted to resurrect his political career two years after resigning from Congress due to a sexting scandal.

Just following his campaign would have been fascinating enough, but the filmmakers got lucky when new sexting allegations popped up and caused his campaign to implode. There are lots of fascinating things to watch: the political campaign and its workings, the press coverage,  his dealing with the scandal, and the increasingly-strained relationship between Weiner and his wife (a top Clinton advisor).

The film is thought-provoking.  Parts  are funny and others are painful to watch. The question I hoped would be answered is why he would allow this film to be made.  Late in the film he was asked that question, but didn’t answer. My view is that, due to his ego, he expected this to be a film about a great political comeback story.  This film is never dull and highly recommended.

Straightforward documentary, played at the Montclair Film Festival, about a great soul singer, Syl Johnson, who never got much acclaim. In fact, I had never even heard of him. He was almost Al Green, and unluckily missed his big shot. He appeared on Soul Train, toured extensively, including today as an 80 something year old, and had a couple of top 100 hit songs. But some key people did find out about him and his songs: Wu Tang Clan, Jay Z, Snoop Dogg and literally hundreds of hip hop artists who sampled him in their songs. Syl is an interesting character, both proud of his accomplishments, resentful he never gained mainstream success, and loving the attention wherever he can get it. The documentary coincided with the release of a $75 boxed set of his catalog, that got a Grammy nomination (for engineering, although Syl perceived it as his). Very cool to hear how his work was sampled, and how good the original songs are. Check him out, and look for this documentary if it gets released. 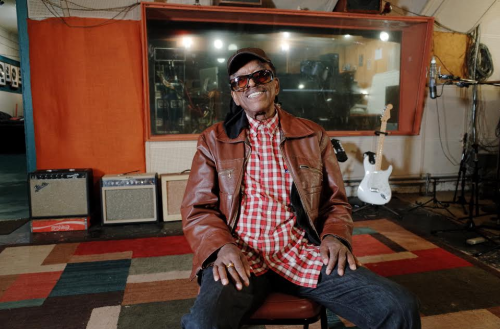 Meru is an excellent documentary about the attempts by three climbers to become the first to  scale the Shark’s Fin route up Meru mountain in the Himalayas.

While watching this, it is hard not to think about how crazy these guys are for doing this.  They put up with incredible hardships as they hung off the side of this mountain in awful conditions while attempting this climb.  They sleep in a little tent tethered to the side of the mountain while carrying everything they need while climbing.

One of the climbers was a co-director and the footage on the mountain is incredible.  It will be interesting to see how the footage in the fictional movie ‘Everest’ of the disastrous climb in the late 90’s compares to this.

In addition to the great footage the backstories of the 3 climbers has a few surprises that add to the film.

If you like this type of movie it is definitely worth seeing.

To Be Takei is an entertaining and mostly lighthearted documentary about the former Star Trek star and current Facebook phenom.    Takei’s charisma shines through.   He  always has a smile on his face and is definitely enjoying this stage of his  life with his renewed time in the spotlight.

While this documentary is mostly lighthearted it does cover some serious topics starting with his days in a Japanese American internment camp during WW2, it’s effect on his family and how his parents handled it during and after the war (and the current musical on that subject he is hoping to take to Broadway).  It also covers some of his early career roles in demeaning Asian stereotyped roles, his coming out as gay later in life and his advocacy for gay rights causes.

The film also entertainingly revies his days on Star Trek with interviews with several cast members including an unflattering appearance by William Shatner,  his days with Howard Stern and his current popularity on Facebook.

This  is one of the more entertaining documentaries of the year.

Life Itself is a great biographical documentary about film critic Roger Ebert.  The movie spans his entire life including a significant amount of filming during Ebert’s final weeks as he finally succumbed to cancer.

The film is a moving tribute and shows Ebert, warts and all, from his days breaking into newspapers while still a teenager, his ascension as a critic while battling alcoholism, a nuanced view of his pairing with fellow critic Gene Siskel, finding his soul mate later in life, and finally his brave and very open battle with cancer.

The film is directed by Steve James, who is most famous for Hoop Dreams.  It’s a very emotional movie movie with a lot of humor as well.  Some people might find parts of this movie tough to watch due to the toll that his illness took on him and the physical problems that he faced, but this is a film well worth seeing.

As followers of this blog know, I like documentaries, and I especially like quirky, funny ones.  Three of my favorites in the past few years have been:

The Final Member is in the same vein—a documentary about an off-the-wall topic that, due to circumstances, personalities, subject matter,  whatever,  becomes interesting, funny and compelling.  For 40 years, “Siggi” Hjartarson has run the  Icelandic Phallological Museum (after his wife made him remove his growing collection from their house).

The collection has all mammal species on display except for the final phallus to make the exhibit complete—that of a human.  The first part of the movie goes through the history of the museum  and the rest focuses on Siggi’s effort to get the final exhibit for his museum.  He ends up with two competing donors. Pall Aronson is a 90+ year old WWII hero in Iceland and, according to legend, is the greatest lover in Iceland history.  He has agreed to donate his penis at his death.  Tom Mitchell is a 60-year-old Californian who is willing to donate Elmo, his self-named penis, before his death.

Obviously a lot of people will be turned off by the subject matter.  But the movie  is pretty funny and interesting, but the director does not make fun of the people involved and it’s interesting to get to hear their story.  While this is not as good as the three movies above, I still enjoyed it.

12 O’Clock Boys is an excellent documentary that follows Pug, an inner city kid from Baltimore, for three years.  Pug is 13 at the beginning of the film and his two goals in life are to be a 12 O’Clock Boy as soon as they let him and to be a veterinarian when he grows up.  12 O’Clock Boys ride dirt bikes and motorcycles through the streets of Baltimore in large groups while doing tricks on their bikes and evading the police.  The police, in theory, have a no-chase policy,  since chasing kids on their bikes could lead to more accidents, but even with that policy, there’s plenty of risk to those riding the bikes and to bystanders.

The movie includes plenty of great footage of the bikers doing their thing.  It’s amazing they don’t have even more accidents. You get great insight into the mindset of the bikers (ranging in age from teens to late 20s) and a view of what it’s like living in an urban environment without much hope for the future.

But most of all, this is a story about family.  In addition to Pug’s interactions with other kids and the 12 O’Clock Boys, there’s plenty of footage of Pug with his family.  His mother has not had the easiest of times and it’s interesting to see her try to keep Pug in line and to observe his relationship with his brother and sister.

Pug is a sharp kid. This movie gives good insight on what life is like for inner city youth, and by the end you have a good idea of which direction Pug’s life is going.

Documentarian Alex Gibney started out to make a film about Lance Armstrong’s return to cycling in 2009. As often happens for good documentaries, film makers need to be at the right place at the right time. In this case, as Gibney was finishing his original film, the final exposure of Armstrong as a cheat and liar evolved, and it was back to the drawing board for Gibney.

He did additional interviews with some of the people that Armstrong destroyed over the years as well as with Armstrong (including as recently as this year). While no new major revelations are made, this is an interesting portrait that sheds some additional insight in what shaped Armstrong, including his early days as a triathlete, his battle with cancer, and the incredible pressure to cheat in cycling in the 90s and stay one step ahead of the testing. This film also uses good archival footage of old Tour de France races as well as Armstrong’s winning years and his comeback in 2009/2010.

I’ve been a big fan of Armstrong since his first Tour win and he has been a well-known presence in Austin with the Livestrong Foundation and the annual charity rides (that I still participate in). Austin is probably the only place that still has something named after him: The Lance Armstrong Bikeway. After watching the recent interviews with Armstrong, it is sad to see he is still rationalizing his behavior and doesn’t really own up to his past mistakes.

For those who have found the Armstrong saga interesting, this is an informative addition.

This documentary presents a compelling message that everyone needs to hear: killer whales, aka Orcas, should be left to roam the oceans in their families where the females live 100 years (males live 50 years!) and not perform tricks for human enjoyment while kept captive in concrete prisons/pools. These animals are incredibly evolved, with strong social skills and family ties. According to this (albeit one-sided, since Sea World refused to participate) film, there has never been a documented attack on humans by orcas in the wild; that only happens all too frequently in captivity, where their constraints and destroyed families seem to mess with them psychologically. It’s heart breaking to see young ones forcefully separated from their mothers. Anyone who watches this will not want to support this industry any further by patronizing these shows, and will support the movement to free all captive whales into their natural habitats. We can enjoy them fine from a boat.