The final entry in Christopher Nolan’s Batman trilogy is a good but not great finale. Set eight years after 2008’s The Dark Knight, this is a satisfying ending to the trilogy and ties up loose ends nicely. After the events at the end of The Dark Knight, The Batman has retired and Bruce Wayne has become a Howard Hughes-like recluse. However a new menace faces Gotham City and The Batman is lured out of retirement.

The new menace, Bane, is good but not nearly as entertaining as The Joker in the last movie. Bane has a contraption over his face to help him avoid pain. With it, my son thought he sounded like Winnie the Pooh, while I thought it made him sound more like Darth Vader. The two characters who I thought really stole the show were Joseph Gordon-Levitt as a young, idealistic police officer and Anne Hathaway as Catwoman/Selina Kyle.  The Catwoman storyline was as interesting as the Batman one.

While they did tie up loose ends, I had forgotten most of the plot points about The League of Shadows and Liam Neeson’s character from the first film, Batman Begins.  Remembering that would have helped in following some of the plot. It was interesting how Nolan has weaved in some themes here about things like the Patriot Act and wealth inequality, but that should not wreck the movie for anyone, no matter where you stand on these issues.

The movie begins with a good action set piece aboard an airplane and there is some good action throughout.  There is also some that is just chaotic. The movie is long – 2 hours and 44 minutes – but went pretty quickly and was worth seeing.

I agree with Bill C, good but not great film. It’s great in some respects: special effects, acting (also agree, Anne Hathaway is tremendous, and some other smaller characters also excellent, Marion Cotillard, Michael Caine as always, Gordon-Levitt, e.g.). And Bane’s voice did sound like Darth Vader. His character is evil incarnate combined with an MMA fighter’s sensibility (what, no need for guns when you’re jacked like that?). Now let me outline where I was bothered, and it wasn’t in minor ways (some of these may be considered spoilers, but I will try to minimize what I give away): 1) Gotham is clearly NY City in this film, and I have no stomach to watch my city get terrorized and bombed once again. The Muslim jihadists will love this aspect, and after the Colorado movie theatre real-life massacre as well as innumerable accounts of innocents being slaughtered, I have no desire to see this dramatized in fiction for our entertainment. I felt the same way about Tarantino’s Inglorious Bastards which has the Nazi social elite being burned to death trapped in a movie theatre while the “good guys” enjoyed their triumph. And this film takes a NY Giants-like football stadium and shows off it’s fantastic special effects while bombs go off and the players get swallowed up, we are supposed to be enjoying this vicariously. This was enough to sour me on this film. 2) I do not buy into its portrayal of New Yorkers, or any Americans actually, being subjected to a madman dictator/terrorist so easily. I bet this is what Osama Bin Laden dreamed about, tearing down Wall Street and major infrastructure, unleashing the masses of lower class poor people, and seeing our society turned into chaos and the rich people being thrown out on the streets. Maybe when the Nazis marched into Poland, but not here. Whoever wrote this crap and thinks we will think it believable is just patronizing us by assuming the movie going public will believe this scenario. 3) Hold NYC hostage and have the federal government reduced to delivering relief packages? Come on, where’s the effort to communicate with the captive New Yorkers, to infiltrate the city? There’s no way you can isolate the city like this. And the fact that Bruce Wayne, Robin and Commissioner Gordon all are aware of exactly when the ticking clock will expire is not also known by our army? What is this, Gerald Ford again telling NY to “drop dead”? That’s enough of my blowing off steam, but you can tell I was seriously bothered by these aspects of this otherwise great film. 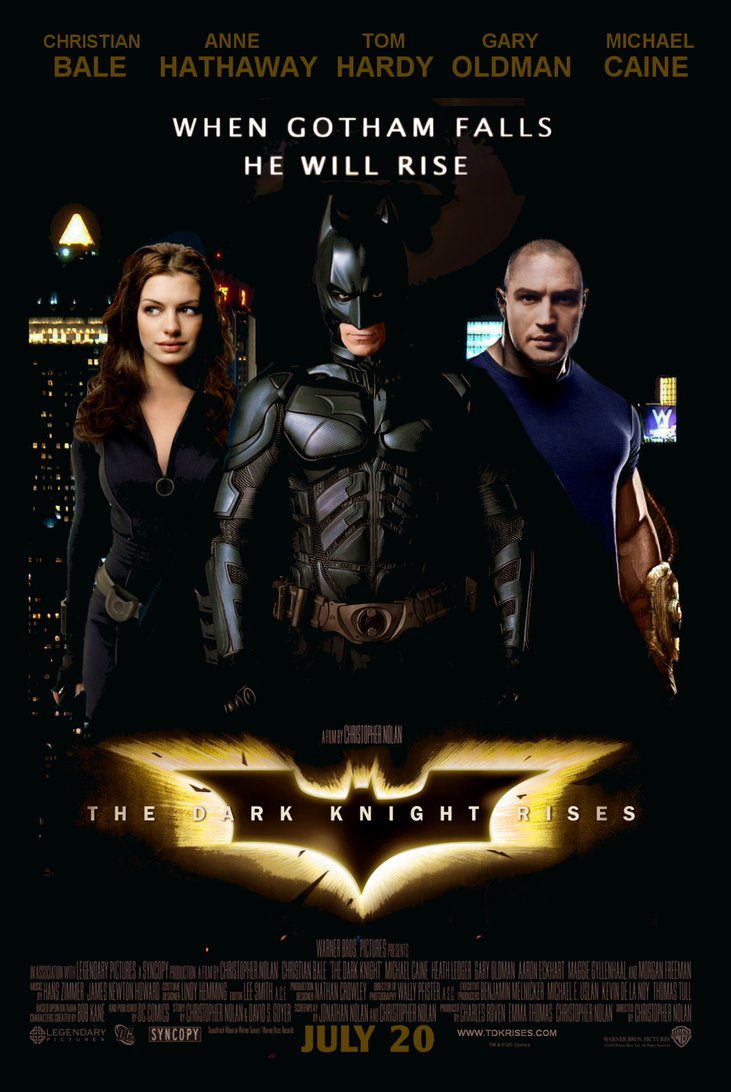 2 thoughts on “The Dark Knight Rises”